I only have "eyes" for you-

The cold snowy days seem to have no end in sight, they have worn me down and made me nostalgic for a bit of color. 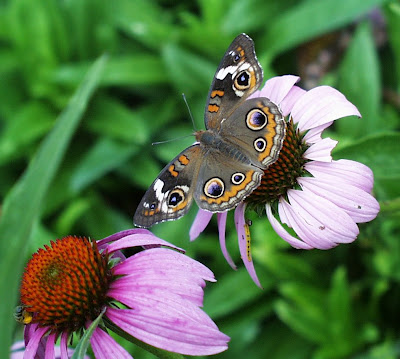 A two-for-one in the color department: A Common Buckeye nectaring on Purple Coneflower, Echinacea purpurea. This Ohio native prairie plant is just the bee's-knee for attracting butterflies. And who doesn't have "eyes" for that Buckeye? Occasionally we have bumper crops of buckeyes (like in 2010) but some years they are uncommon in Ohio. This is not a hardy butterfly, but rather one that re-colonizes in northern states during long hot summers. 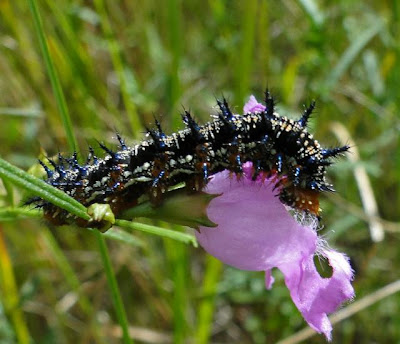 Even the buckeye's caterpillar is a stunner! It can often be found in chemical free lawn or roadsides, using plantains or members of the snapdragon family as host plants. This colorful fellow was feeding on an Agalinis sp. (used to be called gerardia.) Photo taken by Jackie Riley. 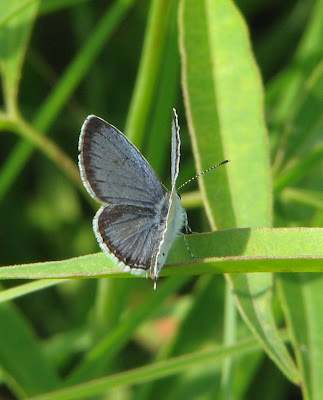 Such a common Ohio butterfly, the Eastern Tailed Blue could be easily confused with the rarest of Ohio butterflies- the Karner Blue. They are both members of the Lycaenidae family.
...
This is a poor photo for identifying the species, as the "tail" and diagnostic orange spot are obscured from view. However, ETB are lovely little butterflies, too often over looked and snubbed for being common. If they were as rare as the lupine dependant Karner- we would be mad for them as well. 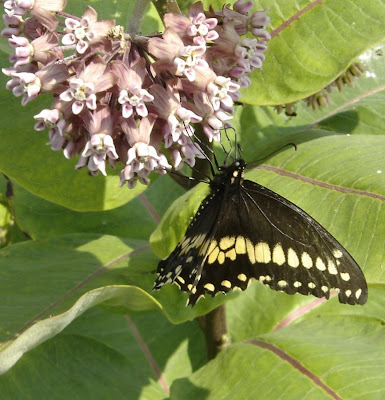 Butterflies love milkweed, and it is not just the Monarch which utilises this Ohio native plant. Many species of butterflies nectar on the honey-scented flowers. This male Black Swallowtail will nectar here, but the female Black Swallowtail will be searching for Golden Alexanders, Zizia aurea or other members of the parsley family for egg laying. Swallowtail caterpillars wouldn't survive the toxins in the milkweed. Butterflies are a picky lot, with very particular needs in host plants.
...
It is fascinating to study the butterfly/ host plant relationship. The more you know about these winged jewels, the more you will want to plant the host plants which attract them and provide habitat for their conservation.