For those interested in botany, especially in the dispersal of oak trees, you would have been amazed at the science in action at our Greater Mohican Audubon's Big Sit.

Let me explain that a bit. First off, the Big Sit is a friendly competition among birders, where we see how many species of birds we can count while confined to a 17 foot circle, generally a 24 hour gig. So that explains WHY I would be sitting outside and readily able to monitor the activity of our local Blue Jays all day on Sunday Oct. 11th.

The Blue Jay is a member of the highly intelligent Corvid family. They are a social group, who are often under appreciated due to their boisterous personalities. But like most Corvids, their interactions and intelligence makes them a fascinating species. Blue Jays are widely known to the the major disperser of acorns, and if you like Oak trees (see the previous post), you should thank a Jay.

Early in morning Gary Cowell and I noticed the Blue Jays ferrying acorns from some location south of our Big Sit site. Throughout the day the Blue Jays continued, flying south with empty maws only to return in short order with acorns protruding from their bills. Flight after flight, hour after hour, the jays continued a relentless pursuit for their cache. One study documented jays transporting and caching 133,000 acorns from a stand of Quercus palustris trees! Their diligence is admirable. 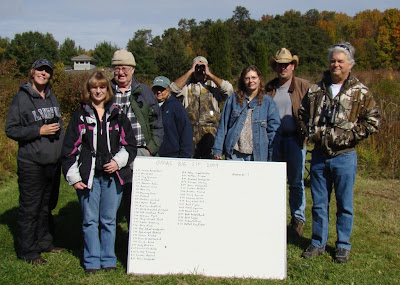 And here is a photo of the Greater Mohican Audubon's Big Sit team (missing from photo- Su Snyder, Jan Kennedy, Jean Taddie and John Precup). Thanks to everyone who helped spot birds, brought food and provided entertaining commentary while we watched Blue Jays- and 49 other species of birds.