Truth is stranger than fiction when it come to nature.  This weekend I had the opportunity to encounter a fungal death in the form of a grasshopper.

At the recent Midwest Native Plant Conference, my friend, John Howard, gave a program which featured photos of ants which had been made in to "zombies" by a fungus.  That program made me aware enough to stop, look and document when I noticed an unusual number of dead and dying grasshoppers on recent outing.

Our outing was at Meadowbrook Marsh, a fabulous habitat in Marblehead, Ohio.  It has become a prime location for birding, botanizing and now...for studying insects.

We first  noted an unusual number of gleeful grasshoppers bouncing along the path. As birders, we welcomed their presence, they are a tasty source of protein for many bird species.  An American Kestrel has taken up territory on the telephone wires nearby,  and no doubt he is loving the free food-fest.

(This is important: a healthy habitat free of pesticides and insecticides will be alive with life.  There is a dramatic difference between the insect activity at Meadowbrook and the deathly quiet we are experiencing in the corn country of mid-Ohio.  Insects are a bioindicator of a healthly environment.)

Soon we noticed an odd sight, numerous grasshoppers had climbed to the tops of grass.  This is a very odd behavior.  Grasshoppers don't usually hang out at the top of grass, as they are tasty and would not last long if they did. Grasshoppers must hide in grass. If they normally clung to the tops of vegetation they would have been called "grass-perchers," and they would certainly be extinct by now.

Why had these not being eaten by birds?  What possessed their brain to make them act so differently?  Why were they so DEAD?  And ugly.  Did I mention they looked zombified? 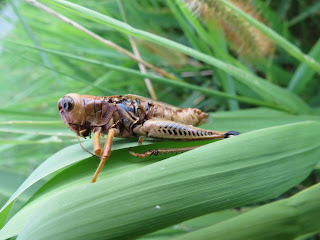 The answers to those questions lie within the grasshoppers.  The bodies have been invaded by a mind-controlling fungus.  Thanks to  Eric Eaton (co-author of the Kaufman Field Guide to insects) for helping me learn about this type of fungus: Eric called it an entomopathic fungus. 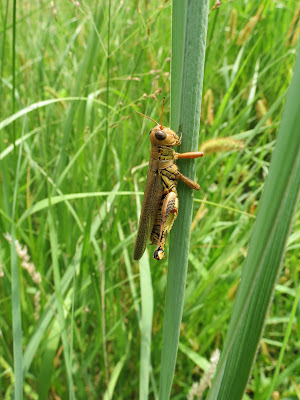 
We found several grasshoppers who had lost their heads over the deal.  It makes me think being a "host" is not a great idea if fungus is on the party guest-list.

Nature is weird, but logical.  So why didn't the birds feed upon the easy-to-find Zombie Grasshoppers? My guess: this fungus tastes bad.  Bad enough that once a bird tastes one, it won't eat more.  This is just one more way nature adapts and fills niches we humans can barely understand.

If you are interested in more grasshopper gore, you'll want to check out the headless Zombie Grasshopper video hosted here: http://www.lisanjen.com/zombie-grasshopper-blog-video-footage/