This post is a bit of a break between the normal birds and butterflies.  Even nature-nuts need a bit of a vacation from time to time, and I bet you will never guess where I spent mine. 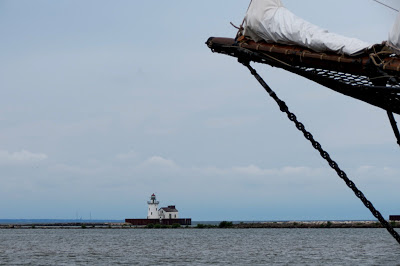 Land, ho!  There she be matey! The mast and rigging is pointing the way to a wee bit of a light house, on the North Shore of  Cleveland, Ohio! 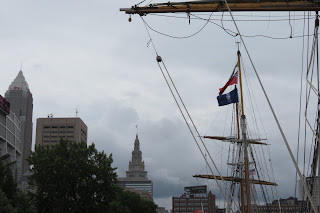 The tall ships were in town, right right between the Cleveland Brown's Stadium and the Rock and Roll Hall of Fame.  That is Terminal Tower smack-dab in the middle of the photo. 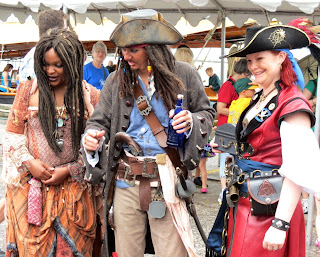 You can see some strange folks on the street in the big city, but these characters would standout in most neighborhoods.  I think they were trying to bribe little children into being long-haul deck monkeys... or maybe they were just allowing kids to have their photos taken with a Capt. Jack Sparrow look-a-like. 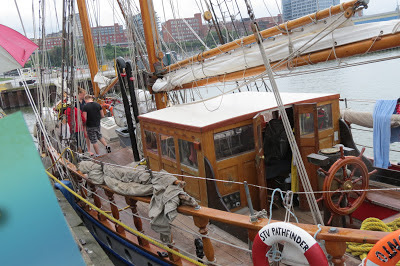 Ah, the Pathfinder was a wee jolly ship and certainly manned by "our kind" of crew... 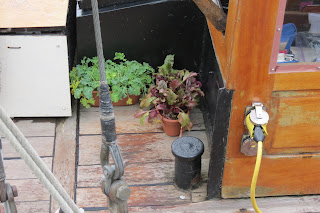 made obvious by the kale and salad greens growing outside the Captain's quarters!  I suppose one would miss butterflies while out at sea, but there is no reason to do without fresh greens.  Bird watching could also be quite good from a ship's deck..

Hope you had a happy holiday weekend, and enjoyed yourselves as much as those of us who attended the Tall Ships Festival in Cleveland over the Fourth of July.
Posted by Weedpicker Cheryl at Saturday, July 06, 2013