Prairies are in peak condition in late July, and I planned to post from some of my recent prairie trips. However, since we have had so few butterflies to admire this year- this one especially caught my attention. 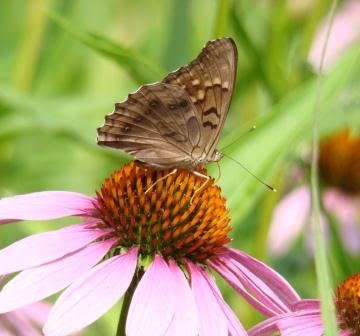 Can you name this butterfly?
It is doing none of the things I would expect this species to do. Honestly, I had to look twice before it made sense to me! This is not a butterfly I would look for in a prairie, and I have never seen them nectar on flowers, come to think of it. 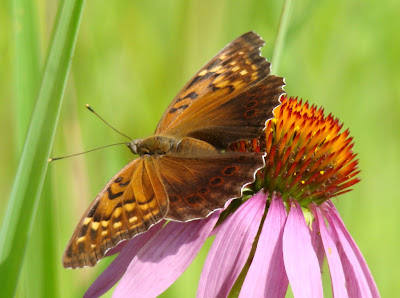 It is a little easier to identify now that I caught a rare glimpse of its opened wings. This is a female Tawney Emperor, one of the three species of butterflies to use Hackberry trees exclusively as a host plant.

But how do I know it is female? First off, the color seemed a bit off to me. This female's color is a bit muted, but look at the red-rings around the eye spots on the hind wing- usually those just appear black. The shape of the wings are also a huge clue. In fact, the "fuller" shape of this voluptuous lady may be the other reason it required my second look. The hind wing is fuller and the fore wing is almost... squared off. 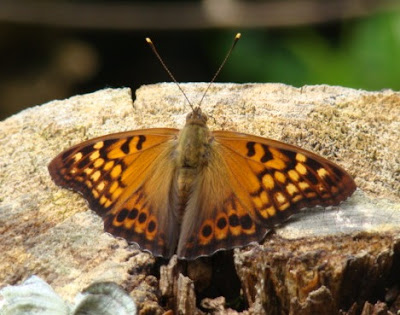 First, it was near a woods, not in an open field. Second, it is perched on a stump. Tawney Emperor are one of those species known to nectar on sap and dung; they are not generally the flower loving type. And finally, look at the inward curves on both the hind and fore wings. This the look with which I am most familiar.

But wasn't it fun seeing the differences of the male and female? I had never thought of Emperors as being dimorphic before. This is almost as good as sorting sparrows- or skippers!