Making the most of our snowy days, I ventured out this morning to try a bit of real cross-country skiing. Surrounded by corn fields and woodlots in mid-Ohio, this is as "cross-country" as it gets. The ice-enhanced snow created the perfect platform to cross acres of plowed fields, usually damp, deep furrowed and difficult to trod . 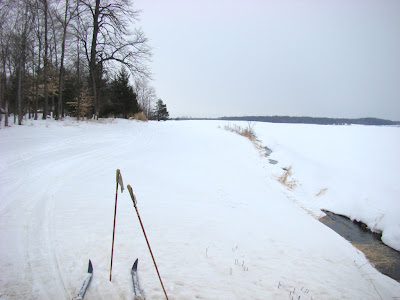 The temperatures had crept up to the mid 30's, but the snow remained crusted over with a layer of ice, caused by several days of thaw and re-freeze. It was a skier's nirvana which fully supported my weight, spread out on 6 foot of ski surface, above a foot or so of snow. However, the snow conditions quickly became a burden for the beast. 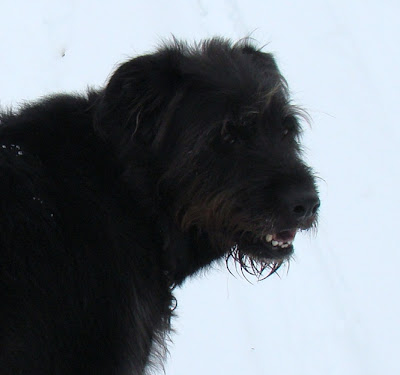 Argus, the butterfly hound, was having a tough go of it. With each step into the snow, he sunk elbow-to-shoulder deep, bringing all progress to a whimpering stand-still. 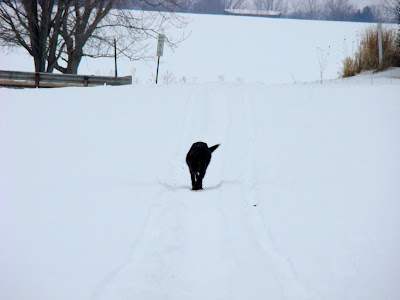 Fortunately a snowmobile track provided just the right amount of compaction to make mobility possible. He was limited to following the track marks across the fields, but at least he was able to follow along.
This photo reminds me: if you are not the lead dog, the scenery never changes. Argus is definitely the lead dog. 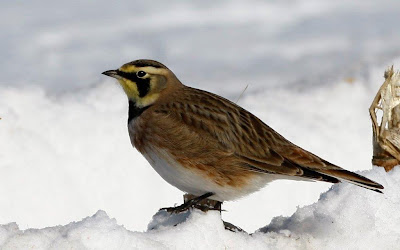 .............. Photo by Dane Adams
The fresh air and sunshine was only enhanced by the calls of the Horned Larks as they scattered throughout the fields. Flocks of these yellow-faced bandit birds spend the best part of winter gathered along the road edges, seeking out cast-off seed (and perhaps salt?) Generally difficult to view in close range, the flocks lift off in a twisting flight, leaving behind only their soft "twinkling"calls. 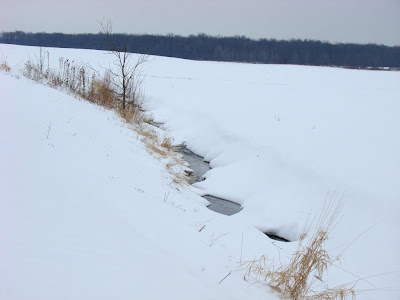 Great Blue Heron, Wood Duck, Woodcock- it is always a treat to see what creatures are utilising the creek at our property's edge. Last winter, I witnessed a Bald Eagle cruising through at top speed, lifting an early evening opossum right out of his tracks! Yum-yum. 'Possum, the other white-meat.
Today is was an American Pipit that provided the surprise for our journey. Once called the Water Pipit, these birds are known to work water edges for seed and insects during their migrations. A wagging tail and self-declaration of "pi-pit" were dead giveaways to its identity as it provided the closest looks I have ever seen. Let the migration begin!

* If you haven't registered yet, follow the logo-link on the sidebar to the Waterfowl Symposium! Its all happening in Columbus next weekend and I hope to see you there!