The Black River Audubon Society in Lorain was a gracious host for my "Butterflies as Bioindicators" program last night.  We had a great crowd of fifty or so folks willing to consider butterflies in a new light:  many butterflies have affiliations with habitats and can be used as markers for those habitats.

When we booked this program last fall, we never  dreamed that we would be able to see butterflies in Lorain in early April. 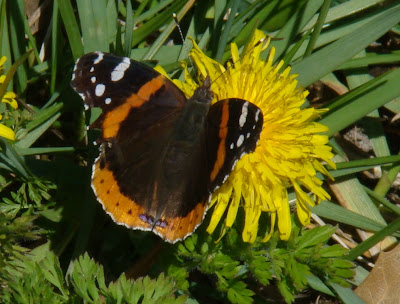 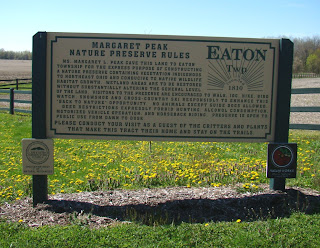 This morning we took a walk around the pond at the Peak Preserve and saw over 30 Red Admirals!  The were a couple of Cabbage White butterflies looking for nectar, but they were far out-numbered by the flashy "leps" with the red-orange racing stripe. Many were very fresh looking, which makes me suspect they were able to survive the mild winter and are recently emerged from a chrysalis.  The theory has always been that Red Admirals fly in from the southwest in the spring. Most of these bugs did not show any of the wear and tear one would suspect if that were the case. 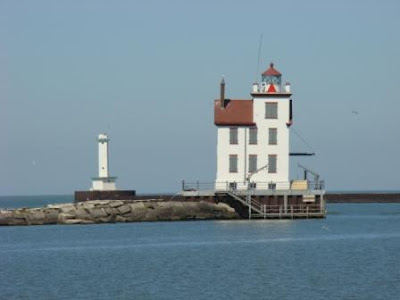 The next stop: Lorain Lighthouse.

This is a favorite haunt to visit and well worth the trip, even if we had no other sightings. 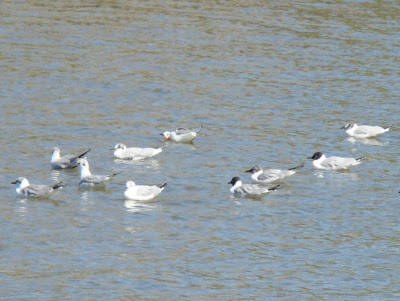 The Bonaparte's Gull were putting on a plumage show today.  The stars of the pageant were the breeding males with their fully blackened "hoods."  The off season plumage is more common in Ohio and we are used to seeing "Bonies" with a small black dot on the side of their head. 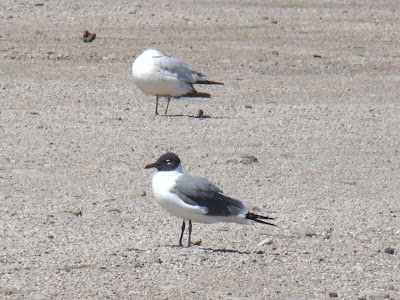 Another slightly larger "hooded" gull was being stand-offish from the other gulls, and spent its time on shore. A closer look determined it had black legs and a bright red bill.  It was too large for a Bonaparte's and the leg and bill colors were our first clues to the identity of this Laughing  or Franklin's Gull.   Fact is, it is time to eat crow on this one.  We called it Laughing Gull and it was probably a Franklin's.  I think I better stick to butterflies!  They don't have different plumages.

It is migration time and one never knows what might turn up!  So take a second look at anything that seems odd or out of place.  You may be surprised by what can be found in Ohio.
Posted by Weedpicker Cheryl at Wednesday, April 04, 2012