"Ashes to ashes, dust to dust" is a platitude often used at burial services to denote the finality of life as we know it.  In most of Ohio, we could be talking about the end of the trees in the  genus Fraxinus.  Lots of them have been getting cut and burned, since we first learned of a wood boring pest which denotes certain death.   Emerald Ash Borer shows no mercy, even in the most holiest of Birding Sanctuaries:  Magee Marsh. 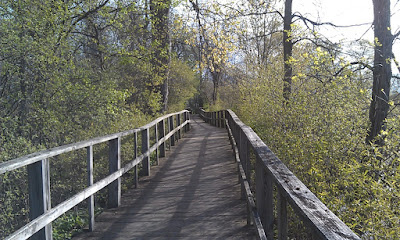 The boardwalk at Magee will soon be filled with birders, craning necks and tenaciously pursuing some rarity, like Golden-wing Warbler.  May presents two magical weeks of migration in Ohio, when the neo-tropical migrants drop into woodlots like glittering jewels. It simply must be experienced in its full glory; birders live large from May 1 to May 15 and count each day most precious. 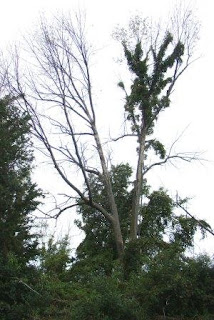 But these invaders give no pause, Emerald Ash Borer damage is obvious.  The ash at Magee have been under attack for several years; some trees still cling to life, but it is a futile effort.

Ohio State Extension has been following the progression of Emerald Ash Borer (EAB).  As of now, we are officially licked.  The red counties are done in, and it is probably time to call it quits.  Fact is: you aren't going to manage it.  You are only going to manage how soon the tree will come down after it is dead. 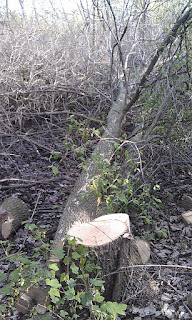 At Magee we are witnessing the after math of a major die-off.  Certainly many of these trees will eventually present a hazard in some places and should be removed if they are endangering the lives of people on the boardwalk. However, as a management practice, this Weedpicker thinks we should slow down a bit and say, "What would J. J. (Audubon) do?"


I think he would leave some mighty tall stumps for the woodpeckers and wrens.  In places where a tree would fall clear of a walk- it could remain standing.  There is a whole lot of activity going on in a dead tree, and our best understanding of nature comes when we observe it.


So let's intervene only when absolutely necessary.  And maybe we can ask our friends at the Division of Wildlife to manage... for wildlife.