Spring has officially arrived when the frogs start singing. Frog song is not only aesthetically pleasing to me, the female froggies are wild about it too! Since several species of frogs gather in the same water-holes, how does a poor gal know what to do? Consider this blog your "Female Frog's Guide to the Singles' Scene." 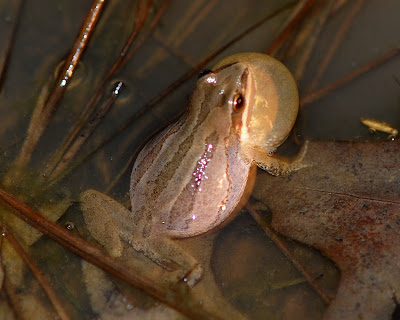 The first frogs to the vernal pools in mid-Ohio are the Western Chorus Frog, Pseudacris triseriata. Pseudacris- roughly translates to "false locust"- and their insect-like call is much like a thumb-stroking the teeth of a comb. Dime-sized, yellow at the jaw line and three distinctive stripes are worn by all stylin' Western boys (cowboy hat not included). 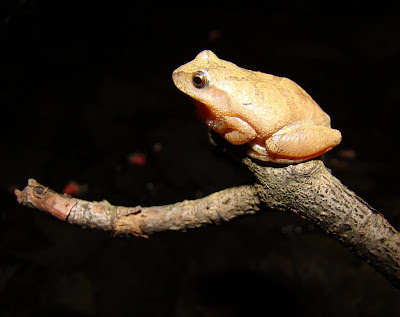 The Spring Peeper, Pseudacris crucifer crucifer is a lead-singer and a high pitched songster: peep-peep-peep. They arrive at the pools a bit later ( I heard numerous calls today), but are similar in size to the chorus frogs. The name Crucifer- means cross-bearing, and the Peepers have a large X on their backs. 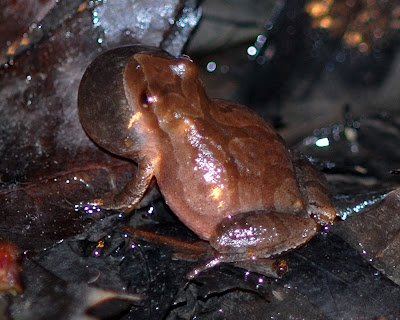 Easily found by their ear-piercing chorus, some frog researchers have reported feeling nauseated from the deafening sound created by a frog chorus in full-swing. No amplifiers needed by these amphibian rock-stars, they do it all with an expandable, vibrating vocal sac. 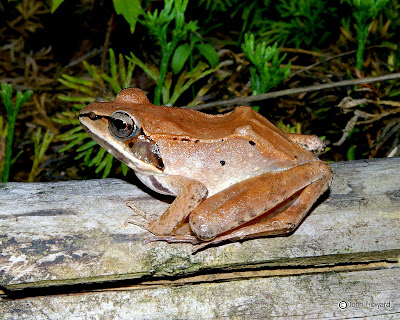 .......Photo by John Howard
Last to arrive to the woodland frog singles' scene is the land-loving Wood Frog, Lithobates sylvatica . This terrestrial frog is found in woodlands and only gather at the water for a short breeding period in the spring. Wood frogs are indicators of high quality, undisturbed woodlots- and have suffered from habitat loss due to development. Recently they were completely extirpated from Franklin County, and efforts to re-introduce them have been ongoing.
Pinkish- to brown in coloration, sporting a bandit's black mask, and deceptively using a voice of duck, these frogs Quack-clack-clack their love calls to attract suitable females. 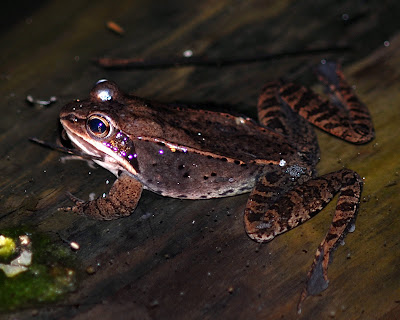 This is the only time of year Wood Frogs can be found in the water.

These early frogs species are sensitive, and negatively impacted by chemical fertilizers, pesticides, herbicides and logging. If quality wetlands continue to decline in Ohio, it will be come even more difficult to find these cryptic woodland singers.

To learn more about wetlands and the interesting creatures that inhabit them, you want to sign up for the Managing Wetlands for Biodiversity Conference being held April 10th 2010 in Ashland. Go right here for the details and registration form.