The Atlantic Puffin is a most improbable bird.    It has the build of a Penguin and bill of a Toucan.
It looks too dumpy to fly. Is it any wonder one would find any excuse to goto Nova Scotia to see this bird? 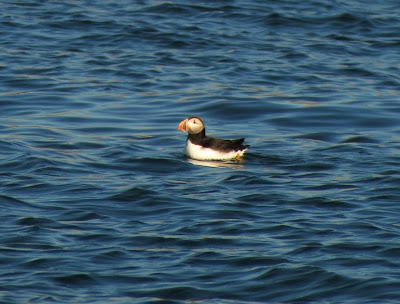 The colorful bill and heavy-inked eye gives this bird a somewhat clownish look. However, there is nothing funny about eking out a living in the Gulf of Maine.  Seems like he must compete for habitat with not only sheep, but every well-to-do newcomer wanting to claim an island for a personal fiefdom.

This one is off to a running start, just as my birding in Nova Scotia... took off.

But birding in Nova Scotia is hardly limited to one species.  Before we get carried away with tales of Northern Gannets, Whimbrels, Willets (a dime a dozen) and a most exciting Hudsonian Godwit encounter let's enjoy the some typical coastal birds. 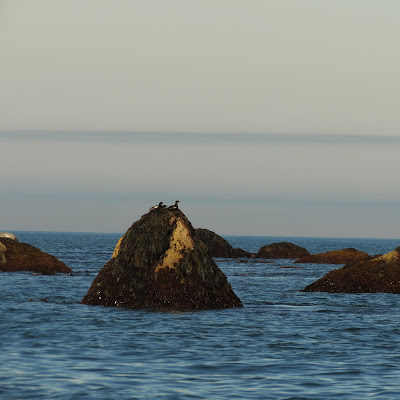 Alcids are the ocean-loving birds who only come to shore to nest.  Atlantic Puffins and Black Guillemonts are two species commonly found in Nova Scotia.

You'll find them on the peninsula to the far left,  where The Brothers islands rest in the Gulf of Maine. Ted D'Eon has been watching terns and protecting the largest Canadian population of the endangered Roseate Terns on these islands.  Ted was a gracious host and a fascinating fellow!  Please visit his website to learn more about this Important Bird Area and its history. 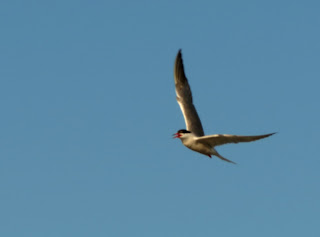 Not only were there Roseate Terns at The Brothers islands, Common and Arctic Terns  also  nest there.

Ted has dedicated himself to protecting the tern eggs and nestlings from ravenous crows, voles and a host of other predators, including mink.  Scroll through those photos on Ted's tern report- he has amazing puffin shots there as well!

Not far from the Bay of Fundy, this area is subject to an incredible 12' tide! 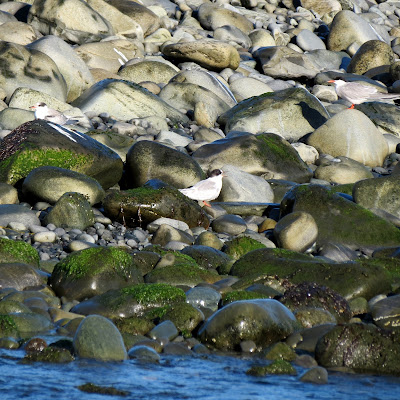 The resting terns are difficult to pick out in my shots (all taken from a bobbing boat.)  For a real treat of terns, go to Ted's website to see these amazing creatures photographed by a man who knows them well.  Be certain to scroll down through all of Ted's photos!

Thanks again for Ted D'Eon's  gracious hospitality and to Ronnie D. and Luisa M. for introducing me to this fascinating man.